What Kind of Ukulele Does Grace VanderWaal Play?

Despite her young age, Grace VanderWaal may already be one of the world’s most famous ukulele players. VanderWaal rose to prominence at just 12 years of age following a series of performances on America’s Got Talent, which she eventually went on to win.

VanderWaal is renowned for her unique, mature vocals and confident ukulele playing. Her popularity has brought considerable attention to the uke and left many aspiring musicians wondering what kind of ukulele she plays.

So what kind of ukulele does Grace VanderWaal play? She usually plays her signature Moonlight ukulele, made by Fender.

But read on – our guide covers all of the ukes in VanderWaal’s arsenal.

Who is Grace VanderWaal?

Born in 2004 in Kansas, Grace VanderWaal is an American actress and singer-songwriter. As mentioned above, VanderWaal came to public prominence with her breakthrough success on America’s Got Talent, which she went on to win at the age of 12. VanderWaal has subsequently released a debut full-length album (Just the Beginning), two EPs (Perfectly Imperfect and Letters Vol. 1), and several high-charting singles.

Since finding success breaking onto the music scene, VanderWaal has grown into a prominent public figure and has amassed a massive following on social media. VanderWaal has also begun acting, appearing as the titular character in the 2020 Disney Film Stargirl.

America’s Got Talent and VanderWaal’s Rise to Stardom

As mentioned above, Grace VanderWaal was first introduced to the public when she appeared on America’s Got Talent. VanderWaal auditioned for the show by performing I Don’t Know My Name to a favorable reception from the judges (Simon Cowell proclaimed the 12-year-old to be the next Taylor Swift!).

VanderWaal performed her own original material throughout the show and reprised I Don’t Know My Name for the finale, where she was crowned the winner of its 11th season. VanderWaal was only the second child winner in the history of the show and its second female winner.

After her success on America’s Got Talent, VanderWaal signed to Columbia Records and released her debut EP, Perfectly Imperfect, soon after. She followed this release up a year later with her debut album, Just the Beginning. Since then, VanderWaal has gone on to refine her enticing sound and continues to use it to bring the ukulele to the masses.

What Kind of Music Does Grace VanderWaal Make?

It can be tricky to characterize VanderWaal’s music in simple terms, as it is so varied and covers so much ground. Her releases thus far have contained elements of pop, folk, rock, and bluegrass. One constant in the music is VanderWaal’s incredible voice, which shows an impressive level of depth, maturity, and personal style for someone her age.

VanderWaal’s career in general thus far has seen her go from strength to strength. She has covered themes like identity, belonging, relationships, childhood, and personal growth. Reflecting Grace’s maturity, her music is inspiring and enjoyable to listen to. Combine this with her unique aesthetics, and it’s no wonder that she’s become the star that she has.

All About Grace VanderWaal’s Ukuleles

Given her success, you might be surprised to learn that one of Grace VanderWaal’s first ukuleles was an instrument that she made herself from a DIY kit! VanderWaal has since acquired other, more professional-grade ukuleles, but it shows that humble beginnings are no obstacle to success. 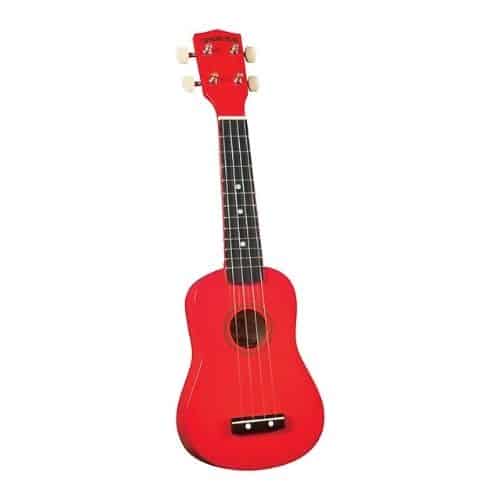 Diamond Head DU-10 Soprano Ukulele Check Price on Guitar Center
If you make a purchase from this link, we earn a commission (at no additional cost to you).

Grace VanderWaal’s first ukulele ever was a DU-10 by Diamond Head. VanderWaal has stated that she bought the instrument herself with money that she was given for her 11th birthday. Diamond Head is a brand that primarily makes beginner ukuleles at an affordable price, and the DU-10 is one of the brand’s soprano ukes. 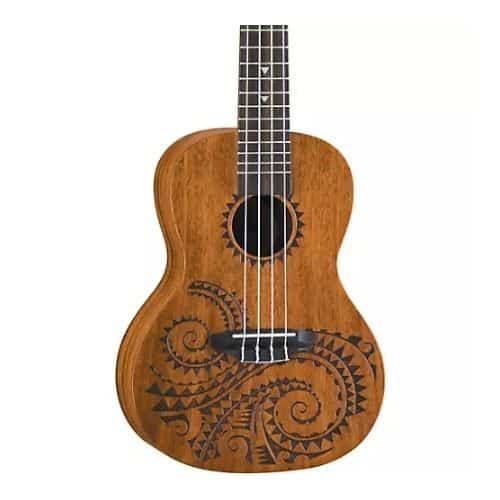 Luna Guitars Tattoo Concert Ukulele Check Price on Guitar Center Check Price on Amazon
If you make a purchase from this link, we earn a commission (at no additional cost to you).

This uke is boho chic through and through. Unlike the earlier entries on this list, the Luna Tattoo is a concert-sized ukulele vs a soprano ukulele – which means that it’s slightly larger and has more robust sound qualities.

The Luna Tattoo boasts a walnut fretboard and comes with a sturdy gig bag to boot. It has a warm, resonant tone, typical of instruments built from mahogany. The comfortable concert-sized body makes the uke a breeze to play for extended periods without feeling cumbersome (or, conversely, too small). 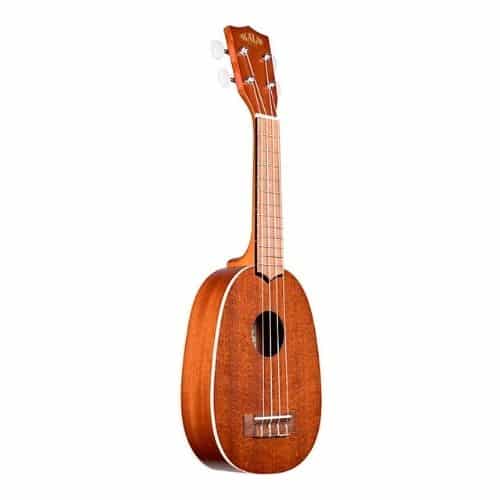 Kala Soprano Pineapple Ukulele Check Price on Guitar Center
If you make a purchase from this link, we earn a commission (at no additional cost to you).

The Kala Kiwi uke (KA-KIWI) is a novelty version of Kala’s Pineapple soprano. As far as appearances go, you might be hard-pressed to find a more visually striking instrument. A perfect partner to Grace’s style, this ukulele does more than look good. It features open geared tuning machines for enhanced tuning stability, meaning it can hold up to even the most forceful strumming without issue.

Thanks to its stage-ready features and rich sound, it’s not surprising that Grace VanderWaal was a fan of this distinctive soprano size ukulele. 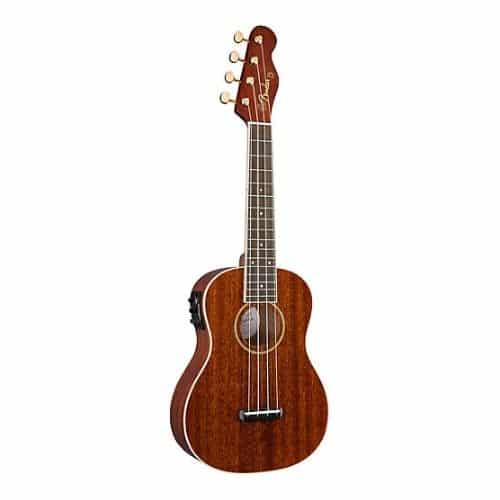 Check Price on Guitar Center Check Price on Amazon
If you make a purchase from this link, we earn a commission (at no additional cost to you).

This instrument is the first uke designed in collaboration between Fender and Grace VanderWaal, and the results speak for themselves. At the time, VanderWaal was the youngest artist ever to receive a Fender signature model, but her first signature uke is anything but a toy (in fact, it’s one of the best concert ukuleles out there).

One thing that sets this acoustic-electric uke apart from the crowd is its Sapele wood top. This unusual tonewood choice gives the ukulele a distinctive look and a powerful sound. The ukulele also features a Fishman Kula preamp system, which is crucial for live performances because it allows you to plug the ukulele into an amplifier while maintaining the integrity of its sound.

Also, the preamp has a built-in tuner, and controls for bass, midrange, and treble that allow you to shape the sound of the ukulele to accentuate specific tonal attributes. While this isn’t necessarily a feature that everyone would use, it adds to the uke’s versatility.

Looks may not be everything, but the Grace VanderWaal Signature Ukulele looks fantastic. Its gold sparkle rosette and classic Telecaster-style headstock give it a very distinctive flair, as do the inlays on the fretboard. It’s hard to deny that this uke is all class, no matter your preferences.

Other features of the Grace VanderWaal Signature Ukulele include its gold hardware, bone nut, Sapele back and sides, and Nato neck. The walnut fretboard gives the instrument a balanced, warm sound, which makes the perfect complement to VanderWaal’s rich vocals. Despite these features, this ukulele is priced at the more affordable end, making it an excellent choice for a first intermediate uke. 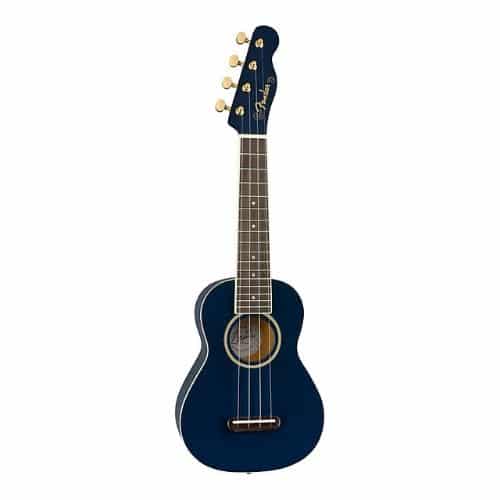 Fender Grace VanderWaal Moonlight Soprano Ukulele Check Price on Guitar Center
If you make a purchase from this link, we earn a commission (at no additional cost to you).

Perhaps the more famous of her signature ukes, the Grace VanderWaal Moonlight Ukulele is the perfect complement to the young star’s aesthetic and the musical trail she is forging for herself. Made from top-quality materials and coming with a range of high-end features, this is a quality ukulele with a great sound.

With its satin navy blue finish, it’s easy to see how this signature ukulele has become so quickly iconic. It also features a Fender telecaster-style headstock, which is visually striking and also promotes tuning stability. Despite being a soprano ukulele, the Moonlight uke does come at the larger end of things, and its fret size makes it comfortable to play even for musicians with larger hands.

Like VanderWaal’s other signature model, the Moonlight ukulele features a Nato neck and bone nut. However, the Moonlight uke uses mahogany for its body, which gives it a deeper, warmer tone than many other soprano ukuleles tend to feature. The gold hardware, paired with the Fender headstock and blue finish, looks fantastic and gives the uke an instantly iconic, highly distinctive look.

Another difference between the Moonlight soprano and Grace’s other signature model is that the Moonlight ukulele doesn’t offer amplification. This makes it a better option for those who are mostly looking to play the ukulele at home or in settings where amplification isn’t necessary.

Reading about the songstress Grace Vanderwaal is one thing, but seeing her in action is entirely different. If you’ve never seen VanderWaal perform live before, she is a force to be reckoned with. Below is a video of the performance that started it all for her on America’s Got Talent. 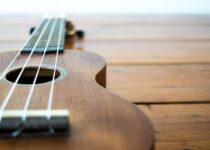 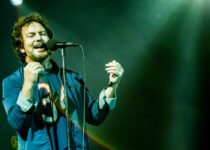 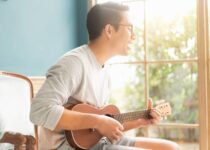 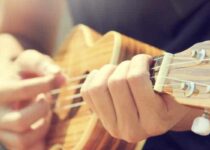 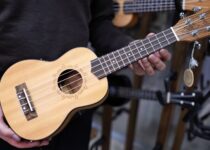 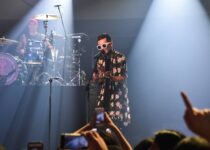