How Many Frets On A Guitar? The Surprisingly Fascinating Answer

Different guitars have different numbers of frets. Acoustic guitars have between 18 and 20 frets, while electric guitars can have anywhere from 21 to 24 frets.

While there is no fixed number of frets on a guitar, modern guitars range in the number of frets and the fret size. Most guitars have between 18 and 24 frets, but some Ibanez and Washburn guitars can have 30-36 frets!

If you’ve ever counted how many frets on a guitar, you may be wondering how the number of frets can influence your playing. The number of frets your guitar has affects the range of notes you can play, the overall playability of your guitar, and in the case of electric guitars, it can also influence pickup sound.

With different manufacturers adding different frets to all their guitars, it can get confusing quickly. Read on to find out more about which guitar has how many frets and how this influences your guitar playing.

What is a Fret, and How Does Fret Size Influence Playing?

The fret of a guitar is the raised element on its neck. Frets are usually made of brass and nickel alloy and embedded at regular intervals along the fretboard.

The purpose of a fret is to alter the length of vibration of the guitar string, which causes the string to produce different frequencies or notes. The further up the neck (towards the bridge) you fret the string, the higher the note. For example, plucking a string fretted at the third fret produces a lower note than the same string fretted at the fifth fret.

Guitars also come with different spacing between the frets, called fret size. Fret size and number affect the length of the fretboard, which in turn affects playability.

The number of frets can influence how the guitar pickup works for an electric guitar. Electric guitars can have a neck or bridge pickup (often both), and each produces vastly different sounds because of its position on the guitar. Having more or fewer frets influences the positioning of the pickups.

In a 24-fret guitar, for example, there is a significant shift in the neck’s position, which shifts the neck and middle pickups more towards the bridge. This makes the guitar sound brighter, which suits modern rock songs.

Different playing styles require different numbers of frets. If you’re going to spend a lot of time playing way up the next, you may want a guitar with more frets and easy access to the higher frets. However, if you don’t see yourself as the next Yngwie Malmsteen, this may be less of a concern.

How Many Frets on a Guitar?

The number of frets on a guitar can vary based on whether it’s an acoustic or electric, the manufacturer, the body shape, and other factors like neck design.

How Many Frets on an Acoustic Guitar?

Acoustic guitars tend to have fewer frets than electric guitars, often around 18 to 20 frets.

Because of the soundhole placement, acoustic guitar fingerboards naturally stop around the 18th or 19th fret. Since they’re more suited for soloing, a standard steel-stringed acoustic may have 20 or 21 frets.

Not all steel-stringed acoustics have 20 frets, however. Parlour guitars are smaller, and since they’re suited for playing to a smaller and more intimate audience, they tend to have only 18 frets. The Washburn R314KK is an example of a vintage parlor guitar with 18 frets.

On acoustics without a cutaway, it can be tough to access past the 12th or 14th fret on acoustics. Fender builds most guitars with 14-fret access, so you have better playability of high notes and even barre chords.

If you want the ability to play solos up the neck – common in genres like blues or country – consider a cutaway acoustic guitar with at least 20 frets. The cutaway will help you play further up the fretboard.

How Many Frets on an Electric Guitar?

Electric guitars generally have more frets than acoustic guitars. Electrics are built for playing lead riffs and solos, which means that the guitarist will have to use more high-pitched notes – this is where the increased fret number and fretboard length come in handy.

Many electric guitar solos are played higher up the fretboard, usually around the 15th to 17th fret (such as Jimmy Page’s solo in Stairway To Heaven). Most electric guitars feature anywhere from 21 to 24 frets and have big cutaways that make accessing these frets easy.

21-fret guitars were typical before the 1980s, when 24-fret guitars became prominent. You’re likely to find a 21-fret Stratocaster or Telecaster from Fender. These guitars typically connect to the body around the 17th fret.

The 22 fret electric is standard and is perfect for anyone who wants to experience classic electric guitar sounds. The pentatonic scale is located just above the octave, making it visible and easier to play.

22-fret guitars are perfect for balanced neck-pickup tones and light, jazzy sounds. Look no further than Joe Satriani from Deep Purple or Eddie Van Halen for inspiration. The Gibson Les Paul design is most famous for having 22 frets, but some Fender Stratocaster models also have 22 frets.

24-fret guitars might sound excessive, but their lengthier fretboard gives guitarists plenty of space to play. These guitars are not suited for light jazz or mellower tones but are perfect for heavier genres like metal. They’re frequently seen in the ‘Super-Strat’ design, popularized by Ibanez.

The two extra frets in 24-fret guitars move the neck pickup closer to the bridge, making the output brighter. Like John Petrucci from Dream Theater, some modern rock guitarists prefer this type of electric guitar since it lets them go from a calm bridge pickup to the neck position without muddying up the sound, and offers full access to all four octaves on a guitar.

The PRS Custom 24 is an incredible choice if you’re looking to buy a 24-fret electric, and is an excellent example of a shorter scale length guitar with more frets (as we discuss below).

But modern engineering takes everything a step further, as electric guitars can go up to 39 frets! Guitars that feature more frets than usual include the Ibanez RG550XH (30 frets), the Washburn EC36 (36 frets), and the BassLab Jinmoid, which has a whopping 39 frets plus a zero fret. Here’s a video demonstrating the EC36 if you’d like to see it in action:

Number of Frets on a Classical Guitar

Nylon-stringed classical guitars usually have a similar number of frets as steel-string acoustic guitars – 18, 19, or 20 frets (19 frets is most common). Classical guitars also use nickel-silver alloys for the fret wire.

Like steel-string acoustics, most classical guitars don’t have a cutaway, and the neck joins the body at the 12th fret. This makes it very hard to access the 13th fret and beyond. Only a few classical guitar designs offer access to the 14th fret (and even fewer to the 15th fret).

There are a few classical guitars where the 20th fret is added only across the two treble strings but not across the rest. This design allows you to play some of the higher notes needed for classical music.

Number of Frets on a Bass Guitar

Bass guitars have the same number of frets as an electric guitar. Bass guitars may come with 21, 22, or 24 frets depending upon the manufacturer, model, and the guitarist’s needs.

Bass guitarists rarely use the upper frets except in solo performances, so the standard bass guitar has 22 frets. 24-fret bass guitars are more common among jazz and metal bassists who need more freedom on the fretboard.

Professionals also use fretless bass guitars, but they require a deep understanding of pitch to hit notes accurately. Their range is usually about the same as a 22 or 24 fret bass.

How Many Frets Do You Need on a Guitar?

The number of frets you need depends on the kind of music you play. If you’re a beginner, we recommend starting with a 21 or 22 fret guitar to get used to the size and feel of the instrument.

As you become more comfortable with the guitar, you can experiment with different numbers of frets to find what suits your style best. 24 fret guitars are great for rock and metal, while 22 fret guitars are well-suited for jazz and blues. Check this video if you’re confused between a 22 or 24 fret guitar:

Electric guitars are great for solos because they benefit from the added fret space – allowing you to explore all the scales more fully. On an acoustic, the number of frets you can access depends on whether you have a cutaway. More frets are pretty useless if you’re not able to access them.

Keep in mind that more frets on your guitar shorten the space between frets, making it challenging to fit your fingers and play comfortably. A longer neck can improve access to the higher frets, but the guitar’s neck joint and heel are crucial for resting your thumb while playing on the upper-most frets.

Is there a relationship between fret count and scale length?

While many beginners think that fret count and scale length are directly related, they’re not. The best example for this would be a ’60s Stratocaster with a 25.5″ scale but only 21 frets. On the other hand, a PRS Custom 24 has a 25″ scale length but 24 frets.

However, scale length and fret count are important playability factors when choosing a new guitar. Consider the genre of music you play and the guitar you’re already used to playing.

How many frets does a Fender Stratocaster have?

A typical Stratocaster has 21 or 22 frets. The number of frets depends on the model. Strats initially had 21 frets on the early ’60s and ’70s models, but modern Fenders feature 22 frets. Check the spec sheet of the specific model you’re buying for the number of frets.

Fender has also produced Stratocaster guitars with 24 frets, such as the Fender HM Strat designed for metal.

How many frets does a Gibson Les Paul have?

A Les Paul typically has 22 frets. Gibson includes 22 frets on most of their models, and so does Epiphone. Even the Gibson SG features 22 frets. But a few signature models, such as the Buckethead Signature Les Paul, come with 24 frets.

How many frets does a PRS have?

A PRS guitar commonly has 24 frets, but it may have 22 frets. The PRS Custom range usually features 24 frets and are some of their bestselling guitars. Some of the PRS signature models, the ‘Standard’ series, and some of the ‘SE’ guitars come with 22 frets, including the PRS Mark Tremonti Signature guitar.

What’s a zero fret, and does it count?

A zero fret is a fret wire placed at the headstock end of the guitar neck, just in front of the nut. It essentially takes the place of the nut and becomes the first point of contact for the strings. The advantage of a zero fret is it allows the open strings to sound as even as a fretted string, and with a good factory setup, the intonation and action will be perfect. You can find zero frets on some PRS, Gibson, Strandberg, and other modern guitars.

A zero fret doesn’t ‘count’ as a fret – so, if you have a 22-fret guitar with a zero fret, it means you still have 22 playable frets.

about the author
Jody Schwann
Jody has travelled all over the world with nothing but a backpack and her guitar, busking and playing gigs along the way. While guitar is her primary instrument, she also knocks around on banjo, mandolin, and harmonica. 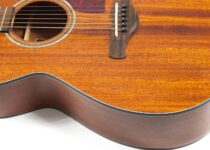 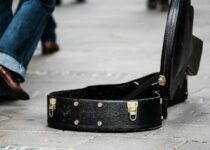 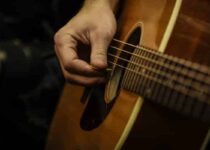 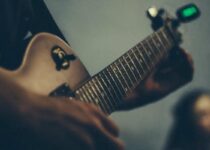 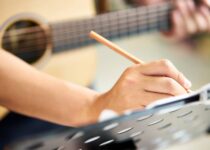 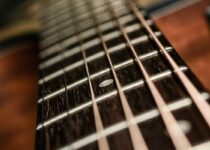