While the uke has attained significant mainstream popularity in recent years, it first came to prominence through its use in Hawaii. Traditional Hawaiian music is a rich source of repertoire for ukulele players at all skill levels – and it’s a whole lot of fun.

Many of the best-known Hawaiian songs featuring the uke are straightforward folk tunes. So, if you’re on the lookout for new songs to work into your practice routine or performances, consider learning some classic Hawaiian ukulele songs for beginners.

We’ve compiled a list of well-known and easy Hawaiian ukulele songs for beginners to the uke to learn. These tunes present a great way to improve your ukulele playing skills, but they’re also an excellent introduction to a beautiful piece of Hawaiian musical history.

The History of the Ukulele in Hawaiian Music

You may be surprised to learn that we need to go further afield than Hawaii to trace the ukulele’s roots. The uke is based on similarly-sized Portuguese stringed instruments, namely the rajão, machete, cavaquinho, and timple.

Portuguese immigrants initially introduced these instruments to Hawaii in the late 1800s. According to popular legend, three cabinet makers from Madeira built the first ukuleles. These men – Augusto Dias, Manuel Nunes, and José do Espírito Santo – gave frequent concerts for the locals shortly after arriving in Hawaii on the SS Ravenscrag.

However, Hawaii’s love affair with the ukulele likely wouldn’t have gotten far without widespread interest and support. The reigning king at the time and Hawaii’s final monarch, King Kalākaua, was a passionate patron of the arts, and he is said to have taken an early liking to the uke. Not only this, but Kalākaua went on to become a skilled ukulele player and performer himself.

After its popularity grew in Hawaii, the ukulele became a prominent part of the musical cultures of several other countries as well. In Canada, for instance, the uke became used extensively as part of teaching music theory in schools. Japanese immigrants in Hawaii introduced Japan to the ukulele, and the British singer George Formby popularized the instrument in the UK.

Technical Breakdown: How to Nail Any Hawaiian Ukulele Song on this List

If you’re an absolute beginner at learning the uke, you may find some of the Hawaiian ukulele songs on this list a bit difficult. This is normal when you’re new to an instrument, and it’s also where knowing how to practice a piece of music effectively becomes essential.

For example, if you’re struggling with a particular strumming pattern or ukulele chord, narrowing in on that part of the song can help you learn to play it cleanly. One of the most important things to do for any piece of music that you’re finding challenging is to slow it down to a tempo where you can play it comfortably. The slower tempo gives you the chance to commit the music to muscle memory without struggling to play it.

Once you can play the part of the song that you found difficult at a slower tempo, gradually increase the tempo. Using a metronome is crucial (a free, online metronome works just fine). Slowly work your way up in tempo until you can play the tune at its original speed. This technique also helps you work on your rhythm and timekeeping and learn to strum in time with a click.

So, now you know how the ukulele came to prominence in Hawaii and how you can learn a challenging song effectively. You should be more than ready to learn some of the Hawaiian classic ukulele tunes that we’ve picked out!

Sons of Hawaii are a group renowned for their incredible musicianship, which has allowed them to elevate Hawaiian traditional music to something truly spectacular. The famed ukulele virtuoso Eddie Kamae was a founding member of the group, whose music served as a platform for Kamae’s groundbreaking approach to the instrument. Uke players worldwide look up to Kamae, so this is a good one to learn!

E Ku’u Morning Dew is a mellow, melancholy song with a bittersweet melody. The song is played at a relatively laid-back tempo and is based on only three chords, despite how complex it sounds, making it an excellent choice for beginners. Interestingly, it follows essentially the same structure as many jazz songs do.

This is a fun tune with a seriously nostalgic air about it. Maori Brown Eyes is also a great way to learn some of the more common 7th chords, like D7 and A7. If you’re not used to playing songs with five or more chords, you might find it a bit overwhelming to try to tackle at first! However, once you’ve played through Maori Brown Eyes a few times, you’ll likely find that the changes stick.

With its charmingly simple arrangement and Hawaiian-language lyrics, it’s not hard to see why Maori Brown Eyes is such a beloved Hawaiian ukulele song. Give this fun song a whirl, and you’ll likely find its melody stuck in your head in no time!

Few musicians manage to move people and touch hearts in the way Israel Kamakawiwo’ole managed to. Famed for his incredible voice and deft ukulele playing, Kamakawiwo’ole’s meteoric rise to fame gave audiences far and wide the opportunity to hear the performer’s take on a range of classic Hawaiian ukulele songs.

Additionally, Kamakawiwo’ole took on popular music. His cover of Over the Rainbow is one of his best-known recordings, and it only takes a quick listen to understand why. This fun song also offers a great opportunity to learn some less commonly used chords, like Dm7.

Perhaps one of the most important songs in Hawaiian musical history, Aloha ‘Oe is a profoundly poetic lovesong originally composed by Queen Liliuokalani (who at the time was a princess). The song is said to be inspired by an embrace she shared with Colonel James Harbottle Boyd, and the earliest known recording of the song was released back in 1898.

The cultural significance of this Hawaiian ukulele song alone should be reason enough for anyone interested in Hawaiian music to learn it. It’s also an excellent choice for beginner ukulele songs because of its simplicity; the song has only four chords.

This beautiful, nostalgic tune provides the listener with a nostalgic look at a simpler, more innocent time. The chords included in the song reflect this; it’s based entirely on C, F, and G7. This makes Ku’u Home an accessible, straightforward introduction to playing through chord changes on the uke. If you’ve found some of the other entries on this list tricky, we’d recommend that you give Ku’u Home a go.

Something else that we appreciate about Ku’u Home is how effectively the melody and chords work together. The song is an excellent example of how you only need a few chords and a vocal line to create something magical.

Another beautiful Hawaiian ukulele song based around just three chords, Waimanalo Blues is an incredible show of musicianship from Country Comfort. This band spearheaded the renaissance in Hawaiian music in the 1960s and 1970s. With a tranquil feel and nostalgic melody, Waimanalo Blues is a tune that stays with you.

This song is also a great introduction to 7th chords. While not as widely used as standard major and minor chords, 7th chords are often used in Hawaiian music to create a sense of tension and release. Familiarizing yourself with them is an essential part of your journey on the instrument.

John Cruz’s Island Style is a touching tribute to Hawaiian culture and family love. Cruz deftly illustrates the beauty and richness of the Hawaiian landscape and the close-knit family bonds that are so important to the local culture. He somehow manages to do this in a song with only three chords, which is no mean feat!

Island Style is a great choice if you’re looking for a lighthearted but touching number to add to your ukulele repertoire. What better way to honor the uke than by celebrating the country that has made it into what it is today?

E Huli Makou is a classic of Hawaiian music. Based on a traditional Hawaiian style of vamp (with two seven chords in a row), this song is an excellent choice for newcomers to Hawaiian music to learn. What’s more, this is a song you’ll encounter just about everywhere in Hawaii. Its ubiquity makes it essential learning for anyone serious about picking up a uke.

The fact that E Huli Makou is so popular means that there are many different renditions of it, giving you plenty of choice and variety in finding a version that you enjoy playing along with.

Have you heard this classic Hawaiian Christmas song? Conjuring up images of both Father Christmas and hula dancers is no mean feat, but Bing Crosby achieves just that with ease for many of us. This is one of the faster Hawaiian ukulele songs on this list, so it may feel a little daunting at first. Start slow when learning the chord changes, and you’ll be playing it up to speed in no time.

You can play a simplified version of Mele Kalikimaka with just five chords. However, you can play along with all of the changes in the original recording if you’d like. This makes the song a great way to learn a huge number of new chord voicings and shapes and celebrate Christmas island style.

What better way to end this list than with the King himself? Blue Hawaii is a slow song, making it an excellent choice for beginners to the instrument. The tempo makes playing through the chord changes simple enough without being overwhelming, but the chords themselves are varied enough that the song doesn’t get boring.

Written for the film with the same name, Blue Hawaii tells a tale of romance, tourism, and heartbreak on Hawaii’s sandy shores.

Have you played through all the songs on our list and still haven’t gotten your fix of classic Hawaiian ukulele songs?

Fear not! Here are some more beginner-friendly Hawaiian tunes for the uke: 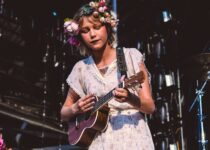 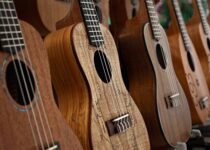 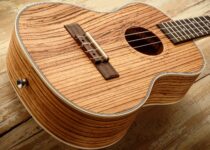 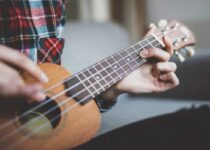 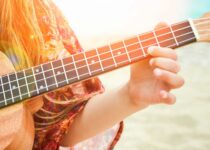 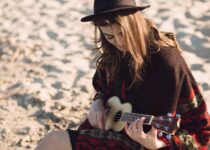