One of John Denver’s earliest original recordings, “Leaving on a Jet Plane” is a deeply moving tale of travel, yearning, and separation from the ones we love. Despite being one of Denver’s best-known songs, the original and second recordings of the song failed to chart.

In fact, it was the third recording of “Leaving on a Jet Plane” that ended up becoming the beloved classic that we know it to be today. Originally written while Denver was at Washington Airport on a layover, the song is an incredibly simple piece of music that uses just three basic chords. Despite not actually featuring any ukulele playing, the light, airy feel of the original recording means the song lends itself naturally to the uke.

If you’ve been wanting to learn how to play “Leaving on a Jet Plane” on the ukulele, then look no further! Our guide covers the chords and strumming patterns you can use to play this classic John Denver tune on the uke.

“Leaving on a Jet Plane” is a beginner-friendly song to learn on the ukulele thanks to its simple composition and easygoing tempo. The song is based on just three basic ukulele chords – C, G, and D – and it follows the same progression from start to finish. This simplicity makes the song easy to master, and the tune’s more laidback tempo helps the chord changes feel manageable.

Each line of “Leaving on a Jet Plane” starts on the chord of G. For some beginners to the ukulele, this is one of the trickier chord shapes since it requires fretting with three fingers, which can feel a bit awkward if you aren’t so used to the instrument. However, once you’ve mastered the G ukulele chord, you’ll find that you can play many different chords with the same shape simply by moving it up or down the fretboard.

“Leaving on a Jet Plane” starts with a short, mellow instrumental line based on the chords of [G] and [C] before the vocal line comes in.

The verses in “Leaving on a Jet Plane” are also based on the chords of [G] and [C]. For every third repetition of the chord progression, Denver adds a [D] at the end of the phrase for a sense of variety/change.

Then comes the chorus. While it uses the same chords as the verses, you may want to play along to the choruses with a little more power to give them a greater sense of weight than the verses.

“Leaving on a Jet Plane” rounds out with a brief outro. After repeating the same chord progression that played throughout the song, it ends on [G], giving it a sense of resolution and optimism.

View the complete ukulele chord chart for “Leaving on a Jet Plane” here.

For “Leaving on a Jet Plane”, we’ve got two strumming patterns that we recommend to beginners. One is rhythmically a bit closer to the spirit of the original recording, but also somewhat trickier and busier than the alternative strumming pattern we describe below. You might like to try both and see which you prefer.

This is the slightly more complex strumming pattern that we referred to. While trickier than the second, simpler strumming pattern provided, we feel it gets you a little closer to the original feel of the recording. You may want to experiment with accenting your down or upstrokes to give your strumming a more dynamic, live feel.

The original recording of “Leaving on a Jet Plane” features a beautiful instrumental, a fundamental part of which is various melodies fingerpicked on a 12-string acoustic guitar. If you’ve gotten to grips with the basics of the uke and want to extend yourself, you might like to try to learn these melodic lines in addition to the chords to “Leaving on a Jet Plane”, so you can play along as both a lead and rhythm accompanist.

Something else you might like to try to learn on the uke is “Leaving on a Jet Plane’s” iconic melody line. The simple, soaring vocal melody is relatively easy to play on the ukulele, and you could alternate between it and playing the chords to the song to keep your practice sessions varied and more exciting. 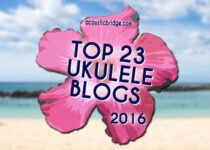 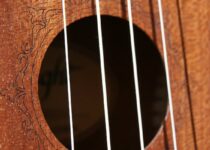 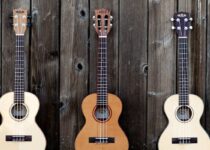 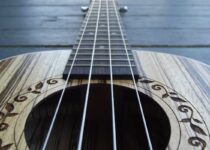 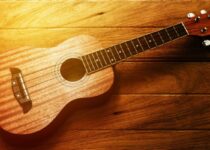 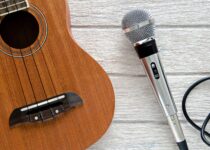